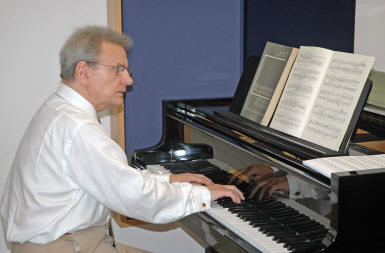 Studied solo piano at the Academy (now University) Music and Drama in Vienna with Paul Weingarten and Richard Hauser, vocal accompaniment with Erik Werba and Chamber Music with Otto Schulhof.

Began his teaching career in 1954

1955-1964 Professor of Piano at the Carinthia Conservatoire in Klagenfurt

In 1964 he was appointed to the teaching staff of the Academy of Music and Drama in Vienna.

From 1964 to1970 he was Director and Professor of Piano at the affiliated branch of the Vienna Academy in Kabul, Afghanistan

In 1980 and 1986 he was a guest Professor in Shanghai, China. Held Masterclasses , Seminars, lectures and courses in Austria, Germany, Greece, China and Taiwan. Annual courses at the International Music Seminar in Vienna.

His pupils are performing and teaching at Music Colleges and Universities in many parts of the world, e.g. USA, China, Korea, Japan, Taiwan and Europe .